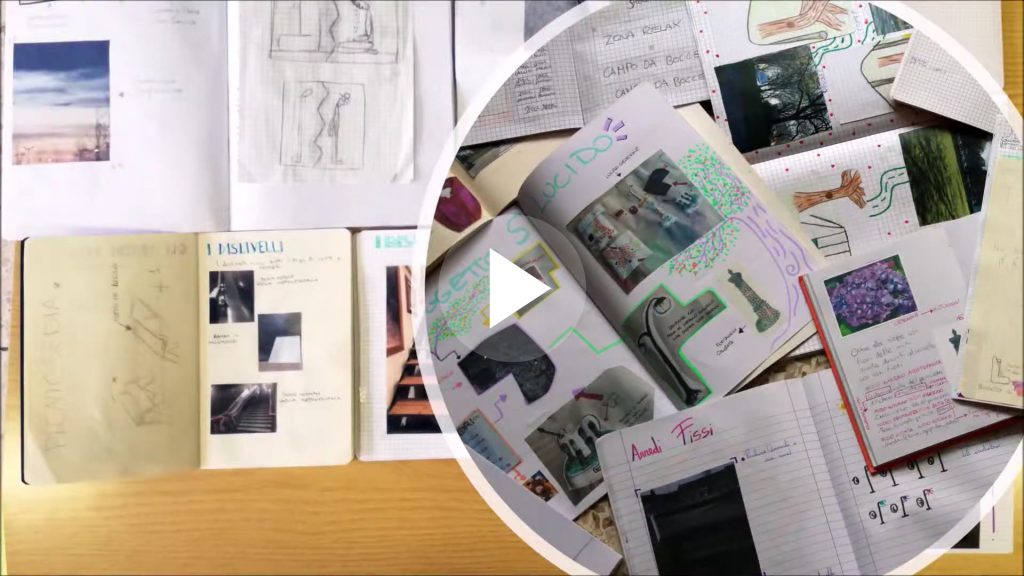 This workshop directly and actively involves students in discovering and learning about the territory, enhancing it by observing the existing resources and transformations, improving services, and revitalising urban spaces.

The aim of the workshop was to initiate enhancement of the formal and informal resources in the area in order to improve services and revitalise urban spaces with the involvement of school children. As a preliminary phase, the experimentation aimed to recognise all the formal and informal resources in the area and implement initiatives where students could play an active role in analysing the problems and contexts where they live and design processes of change, with particular attention to the environment and liveability of open spaces in the neighbourhood. Workshop activities consisted of conversations and an in-depth study into the meaning of living and using spaces, the construction of a ‘logbook’, on interpreting itineraries (in green areas, between streets, between schools, between services, etc.) to understand the movements, exchanges, and times of the built and urban space and analyse the relationships between the everyday objects that surround us but which we increasingly view with indifference and inattention. All these aspects have become important tools to refine map-reading and observational skills, develop graphical-expressive skills, and improve technical and representation skills.

In each context chosen, in each of the small and large urban spaces proposed, critical issues, inconveniences, degradation, or abandonment have largely been recovered, and the potential for use and different ways of interpreting the space have converged along the path (of design and new social interaction). The project areas involved urban parks and small sports facilities set in a residential area with school activities nearby. The need to enhance outdoor places and sports services presented an opportunity to better understand perceptual relationships and ways of being together. The goal was to highlight and propose elements of the built space that could constitute features of identity, identification, and belonging to improve the orientation and navigability of the fabric of interaction. The solutions grew out of a simple relationship between the elements: paths through green areas, street furniture, and sports equipment. In this way, the layout of the paths and the functional distribution of the furnishings served as opportunities to better characterise and strengthen the identity of the space. We believe that involving young people in designing and rethinking spaces, raising awareness, building strategies for knowledge, and helping them in the design process represents a complex and rich path of growth, awareness, feedback about reality, and citizenship. The students were organised into three project groups: ScaR artists, athletes, and designers.

The ScAR artists worked to redesign a park on Via Chopin. The park was designed as a new place for every generation, from children to elderly people, with new playground equipment such as slides, swings, pulleys, and new benches and spaces for resting in the shade of the trees. A new pedestrian path crosses the green space, which contains different species of trees and flowers, a colourful gate and fence, and original street furniture as well as new street lights.

The ScaR designers arranged several public and private places such as small urban parks and private gardens in the neighbourhood. Near the new Fondazione Prada north of the area between Via Ripamonti and Via Buzzi, they created a Music Park with new benches and renewed outdoor spaces. Fountains, barbecues for private and public use, illuminated signs, seating, and coloured lights design and support, identify, and characterise the urban spaces. Lastly, a ‘mystery box’, an open-air ‘room’, was designed to provide places to stop and play alone or with others at various points around the neighbourhood.

In their project, instead, the ScAR athletes recommended upgrading existing sports facilities in the garden on Via Erice, adding a basketball and a tennis court to the bowling green. They also identified another green area within some abandoned buildings on Via Noto, proposing the creation of a new refreshment area such as a small bar and the creation of some ping-pong courts.